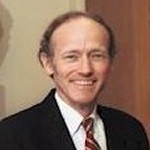 Professor Eades earned his B.A. at Rhodes College in Memphis, Tennessee, and his J.D. at the University of Memphis. After working at the Tennessee Valley Authority as a staff attorney, he earned his LL.M. at the Harvard Law School. He joined the faculty at the University of Louisville in 1977. Although he has remained in Louisville throughout his teaching career, Professor Eades has had the opportunity to be a visiting faculty member at universities in Leeds, England, Mainz, Germany, and Turku, Finland. During his time as a law teacher, Professor Eades has taught Torts, Evidence, Products Liability, Workers' Compensation, the First Amendment, and Legal History. In addition to numerous law review articles and book reviews, Professor Eades has authored a series of books on Jury Instructions and a series of books on Kentucky Law issues. Professor Eades retired in 2008.