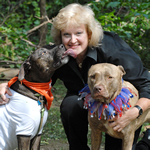 Elise "Ledy" VanKavage began her legal career as a judicial law clerk for the Illinois Appellate Court and the U.S. District Court for the Southern District of Illinois. After working at a St. Louis environmental law firm, Green, Hennings, and Henry, she served as an attorney advisor for the U.S. Health and Human Services. Ledy joined the ASPCA in 1999 as a Midwest Government Affairs and Public Policy Associate. Ledy has worked extensively in the humane movement. In 1985 she organized the Madison County Coalition Against Pound Seizure, successfully stopping the sale of animals for research from her county animal control facility. She then founded the Madison County Humane Society and served as its president for eight years. In 1992 she co-founded the Illinois Federation of Humane Societies and served on its board for ten years.

She was also a cofounder of Operation SPOT (Stop Pet Overpopulation Today) in the St. Louis Metropolitan area and served as a board member for eight years. She worked for the ASPCA for nine years as Sr. Director of Legislation and Legal Training. During that time she spearheaded the passage of over 20 humane bills making Illinois the best state for animal laws in the nation. She is the Chair-Elect for the American Bar Association’s Tort Trial & Insurance Practice Section Animal Law Committee and serves on the ISBA’s animal law subcommittee. Ledy also serves on the Animal Farm Foundation Board. She has been interviewed on the subject of dangerous dog by the New York Times, MSNBC, NPR’s Justice Talking, the Chicago Tribune, and the St. Louis Post Dispatch. She is a co-author of a chapter on dangerous dog ordinances in the American Bar Association Book, Dangerous Dog Laws published in 2009.

Ledy graduated from Eastern Illinois University with a BS in Zoology and attended graduate school at Southern Illinois University at Edwardsville in environmental studies before going to St. Louis University and earning her JD. Ledy is from the heartland; she currently resides in Collinsville, Illinois with her husband Cliff who is the Executive Director of Cinema St. Louis. Ledy and her husband have adopted three brindle pit bulls, Che, Bella, and Karma and also oversee a feral cat colony in the neighborhood.