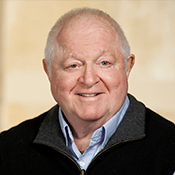 Professor Garland practiced trial law for ten years primarily as a defense attorney before he entered legal education as an assistant professor and assistant dean of admissions for Northwestern University School of Law. He came to Southwestern in 1975 to help design and implement the S.C.A.L.E. program, where he currently teaches Evidence and Criminal Procedure.

In 1998, Professor Garland received "The West Education Network Innovation in Teaching Award" from West Group. Professor Garland was chosen as a 1999-2000 CALI Fellow. As a Fellow, he was part of CALI's pilot applied research effort to create quality computer-based learning materials in legal education. In September of 1999, Professor Garland's Overview of Relevance and Hearsay: A Nine Step Analytical Guide, was given front page billing on the Lexis Lawschool web page. Professor Garland is the author of a multimedia compact disc, Evidence Lecture Slides, for use in conjunction with Waltz and Park, Evidence (9th ed. 1999), which are available in Microsoft Powerpoint and Corel Presentations formats.

During his free time, Professor Garland alternates between eating the gourmet foods he enjoys cooking, attempting to engage in the excessive aerobic exercise of his youth, and feeding his computer habit.